Lensmen were delighted when our photograph of Martin O’Malley, the former Baltimore mayor, was splashed across the front page of the Irish Times. It’s always a bonus to get such prominent coverage in one of the country’s most respected papers. 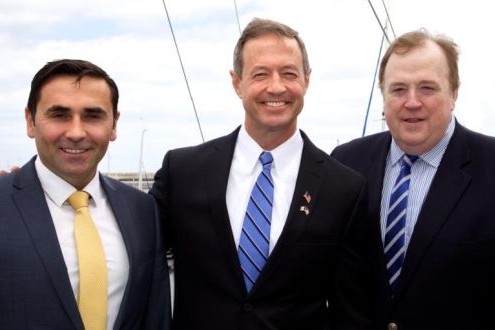 O’Malley announced his bid for the US presidency this week, after he had returned to the States from Ireland. He has denied that Hillary Clinton is the ‘inevitable’ candidate for the Democratic Party, saying: “Inevitable frontrunners are inevitable right up until they’re no longer inevitable.”

O’Malley was in Ireland at the invitation of the Sherry FitzGerald Group. He is related to Aidan Gavin of DTZ Sherry Fitzgerald (on the left in the above photo), and came to Dublin to deliver the key speech in an event in Dun Laoghaire yacht club, which was attended by leading figures in the Irish business and political circles.

This event was scheduled to take place a month ago, but was postponed due to the level of civil unrest in Baltimore at the time. O’Malley was the inspiration for the mayor in the TV series The Wire, Tommy Carcetti, who was played brilliantly by our own Aiden Gillen.

If you would like to read more about Martin O’Malley’s visit, check out the Irish Times article and admire our photograph too!

As well as the photographs provided by Lensmen to Sherry Fitzgerald, we also created the video you see above using these photographs. This is done by combining the images in an editing programme, over which can then be added music or narration. We can also add captions, graphs, diagrams, etc, any element that would enhance the viewer’s understanding.

This service is available to all our photography clients, and files of the final video will be sent to you so that you can add it to your website, your social media accounts or even include in email newsletter campaigns. The videos can also be created retrospectively, e.g. for an event we covered for you last year or six months ago that you would like to showcase again.