Last week, Lensmen were involved in the launch of the first automated Red Light Camera System, which was installed at the Blackhall Place junction with the Red Luas line. This particular junction has a very bad record of motorists breaking the red light and entering onto the Luas line, sometimes colliding with the trams and often causing the Luas to brake sharply. Either event can cause injury to the passengers of the Luas – especially in rush hour when a lot of people are standing, not to mention the stress and injury the to Luas drivers.

This photo here shows just how dangerous this junction can be when motorists ignore the red lights:

In an effort to encourage people to pay more attention to interacting with the trams, Luas released two videos last year of with footage recorded on cameras inside the drivers’ cabs; one of near misses with motorists and another of pedestrians walking out without looking. Below is a short video of how reckless motorists can be when crossing Luas lines:

Minister for Transport Paschal Donohue officially launched the new automated Red Light Traffic Camera system last week. From now on, anybody caught on camera breaking the red light will automatically receive 3 penalty points on their licence. An Garda Siochána’s PULSE system is now linked to the new red light cameras at this junction, automating the process of issuing fixed charge notices for this offence. The system captures images of motorists breaking red lights, their licence plate numbers and other data allowing An Garda Siochána to pursue offenders under the Road Traffic Acts.

At the launch, Minister Donohue said “. As a result of motorists not properly adhering to the rules of the road, the junction at Blackhall Place and the Luas Red Line was deemed one of the problem Luas junctions, recording one of the highest numbers of road traffic collisions to date. This has been endangering those who not only use the service but other vulnerable road users such as pedestrians and passers-by. The ability now for An Garda Siochána to monitor the situation and automatically issue penalty points for offences will act as a strong deterrent for reckless drivers while helping to minimise the number of collisions in this part of the city’. 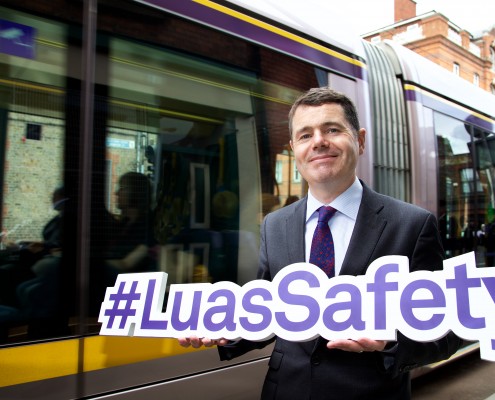 Minister for Transport, Tourism and Sport, Paschal Donohue at the launch of the Red Light Traffic Camera system, 04 June 2015

Rory O’Connor, Acting CEO of the Railway Procurement Agency said: “Luas remains an extremely safe system however with increased traffic in Dublin we have seen an increase in road traffic collisions and we know that over half of these incidents are due to motorists breaking red lights at Luas junctions.”

According to statistics gathered by the Luas, there is an average of 88,000 passenger journeys on the Luas per day. Since 2005, there have been 338 Luas/motorist road collisions, 95% of which were on the Redline. The majority were at the Blackhall Place junction, with the Abbey Street/Jervis Street and Mary Street/Capel Street junctions in the runner-up positions.

Lensmen were involved in photographing the launch at Blackhall Place early on the morning of 4 June. An approved selection of these photographs was then sent out to all the major national media outlets, with a pre-approved press release from Luas. The photographs are also available on the Lensmen public gallery to media outlets or interested parties.

This photographic service is available to any person or organisation that would like to launch a product or service. Our photographers are available for early morning or evening events also. For urgent events, we can syndicate images directly from the location, or we can email from our office after basic processing, e.g. colour balance, exposure, etc, has been carried out. This service is included in our all-in-one prices, but any extensive Photoshopping of images, e.g. removing blemishes, adding elements, etc, will cost extra.

Shane Jennings & His Tactical Approach To The Game Of Life And Joining...
Scroll to top Call us today!