We have time-lapses of many other of Dublin’s most popular locations on our YouTube and Lensmen channels, such as Grafton Street, Temple Bar, the Samuel Beckett Bridge. You’ll also be able to view samples of the other video projects we have worked on since our video department was set up.

We have many more creative projects such as this up our sleeves, but you’ll have to wait and see what fresh perspectives on this fair city we will be bringing to you in the near future. Watch this space!

Lensmen are Specialist in Long and short term Time-lapse of Construction Projects Photographer in Dublin, Ireland. 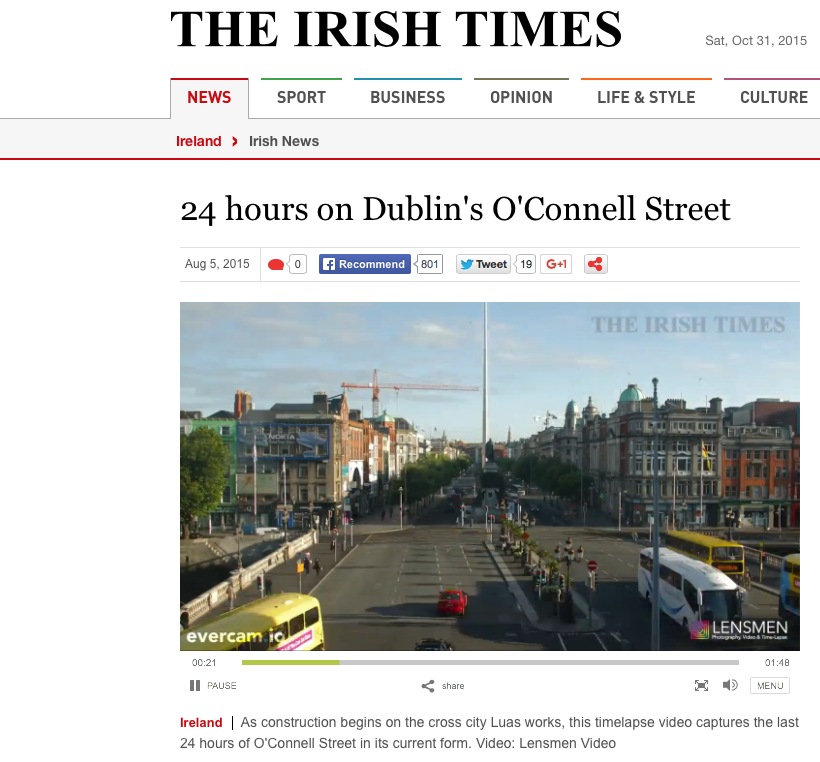 Lensmen was busy last weekend shooting a time-lapse of O’Connell Street, Dublin, the last chance we had to capture the boulevard before it was colonised by traffic cones in the name of the Luas Cross City development.

With the kind assistance of the Irish Blood Transfusion Service, who allowed us to shoot from their offices overlooking O’Connell Bridge and down O’Connell Street, we set up a camera to record the entire weekend’s comings and goings on that central section of Ireland’s capital city. Our single camera captured the traffic, pedestrians, rain, sunshine, moonshine, revellers, tourists, lost people and even the procession commemorating the 100th anniversary of Jeremiah O’Donovan Rossa’s funeral.

The Irish Times have also featured this video on their website, and we were delighted to see that it was one of their most watched videos this week. Why not pop over to their website and give us another viewership boost?!?

Shane Jennings & His Tactical Approach To The Game Of Life And Joining...

Photography At The National Ploughing Championships 2017 Ireland.
Scroll to top Call us today!