This boy is cracking up, this boy has broken down… is no more… and the boy is now back in town!!!

The statue of the Thin Lizzy Star was originally unveiled in 2005 by his mother, Philomena, but have been removed for repairing after it was hit by a truck which had damaged his hand and guitar.

After months of being away or as it is known as…”going on holidays with his ma”, he was returned to his usual spot on Harry Street.

His mother Philomena reunited with a statue of the Thin Lizzy Legend said “Everyone loves Philip,” to those who gathered around.

This is the second time that the famous rocker’s statue has had to be repaired.

The statue which was sculpted by Paul Daly for the Róisín Dubh trust,  commemorates the life and work of Lynott,  has become a landmark of Dublin and a site of pilgrimage to fans of the group from all over the world.

The Lensmen news team was delighted to be there on Harry Street when the Irish rock legend returned!

You can check out our video below: 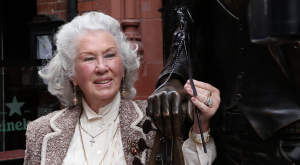 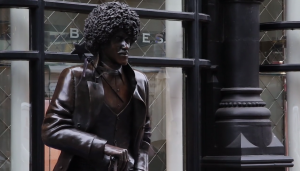 View more of our services

Onboard The Thundercat As It Speeds Down The Liffey