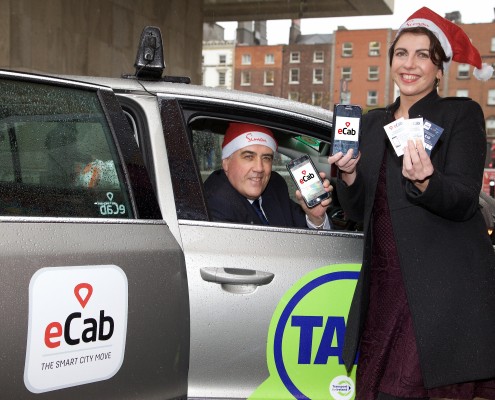 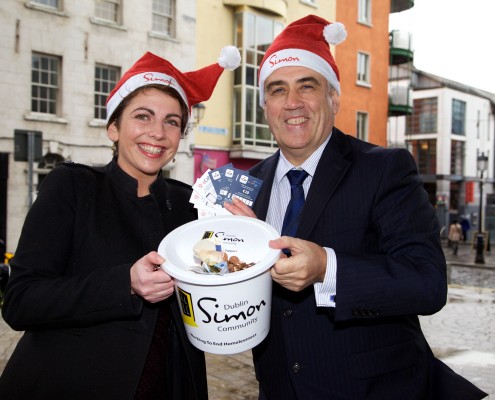 Vinny Kearns, spokesman for the eCab Dublin Alliance, and Kelly Cowley, head of fundraising at Dublin Simon Community, today launched the ‘spare a thought’ campaign which will see ecab donating €10 to Dublin Simon Community for every new download and booking of a taxi in Dublin over the month of December 2015.

“The company behind taxi booking app eCab Dublin has pledged to raise much needed funds for the homeless community this Christmas.

The campaign, titled ‘Spare a Thought’, will see eCab donating €10 to Dublin Simon Community when anyone who downloads the eCab App in December, books a taxi and enters the ‘SIMON’ promotional code.

Taxi drivers from VIP Taxis, NRC and Xpert Taxis will also wear Dublin Simon Santa hats during the campaign to raise awareness of the problem of homelessness.

According to Dublin Simon Community currently there are over 2,300 adults and in excess of 1,400 children in emergency accommodation in the Dublin region alone.

“As we continue to see increasing numbers of people, families and children coming to our doors for help, your support will make a vital difference and enable them to move to a safe and secure place they can call home.”

Vinny Kearns, spokesperson for the eCab Dublin Alliance, said: “eCab Dublin wants to remind people that Christmas is a time for giving to those who need it most and this campaign means it won’t cost them anything more than a selfless thought”.

“€10 might not seem like a lot but it could make all the difference to someone this Christmas.”