Introductory session of the Assembly – hosted at Dublin Castle

Lensmen were on site for the welcome meeting of the Citizens’ Assembly at Dublin Castle. The Assembly is a body made up of the Chairperson, Ms. Justice Mary Laffoy, and 99 citizens randomly selected to be broadly representative of the Irish electorate, with a mandate to look at a number of key issues. 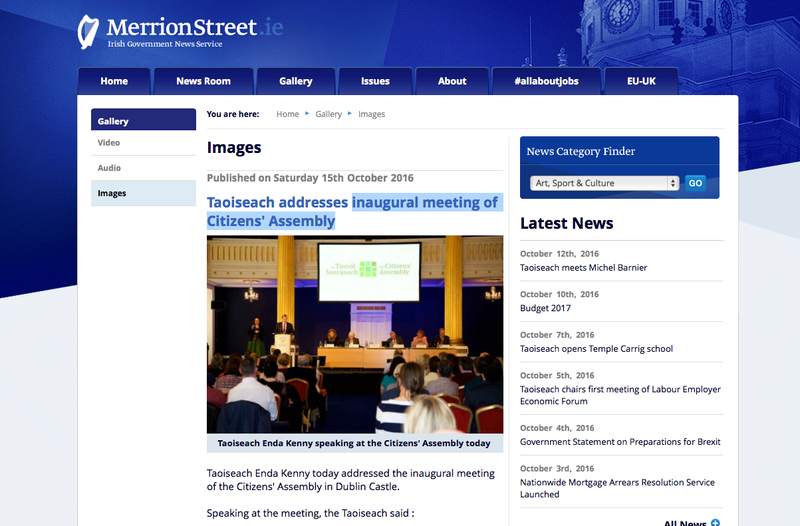 An Taoiseach Enda Kenny TD, who addressed the Assembly, thanked the members for participating in the Assembly and the outlined the importance of the process saying “Your work in addressing and achieving this vital consensus on behalf of us all will affect – indeed profoundly affect – how we live our individual lives and our national life in the Republic of Ireland in the years to come. Therefore, on behalf of the Oireachtas I thank each and every one of you for your personal commitment, your civic generosity and above all your courage in contributing to this national discussion of such significant import.

The Taoiseach called for respect for the members “On behalf of the Oireachtas I ask everybody to please allow the members of the Assembly the necessary space and respect to go about their work. As citizens of this Republic let us consider the work of the assembly and the issues at hand according to the highest standards of our best selves.”

The Chair of the Assembly, Ms. Justice Mary Laffoy welcomed the Members of the Assembly and encouraged members of the public to be involved saying “I believe that the Assembly will be a substantial and comprehensive national endeavour, one which, upon its conclusion, we can look back upon with some pride. The proceedings of this Assembly will be broadcast live on the web and I would like to strongly encourage Irish citizens, at home and abroad, to tune into the debate and get involved.”

Chairperson Ms Justice Laffoy continued “Being a member of this Assembly is a rare privilege and a significant undertaking, and in agreeing to participate, the members are giving freely their time in service to the State. It is critical to the success and integrity of this Assembly that the members, can freely and confidently make contributions and express their views without fear of harassment or criticism.”

– Maurice Manning, Chairperson of the Expert Advisory Group on Commemorations and Chancellor of the National University of Ireland, who spoke about ‘A history of social change in Ireland’;

– Ita Mangan, Chairperson of the Citizens’ Information Board, spoke to the Citizens about ‘Citizens’ Involvement in key decisions for Ireland’s future’;

– David Farrell, Professor of Politics at UCD and Research Director of the Convention on the Constitution (2012-2014), spoke about ‘Citizens’ role in decision making – Ireland’s experience to date’.

The Assembly then met in private session to deliberate the Work Programme, Key Principles, Rules and Procedures, and Calendar for the Assembly going forward.

A Steering Group will be put in place to support the Assembly in the efficient and effective discharge of its role and functions. This Steering Group shall assist with planning and operational issues associated with the work programme and will consist of the Chairperson, Ms Justice Mary Laffoy, and a number of Assembly Members selected by the Members.

As provided for in the Oireachtas resolution, an Expert Advisory Group will also be established to assist the work of the Assembly in terms of preparing information and advice.

The Expert Advisory Group will be comprised of academics and practitioners across a number of specific fields of interest including:

However, the composition and focus of the Expert Advisory Group may change during the lifetime of the Assembly. The main roles of the Expert Advisory Group include supporting the Chair and the Secretariat in constructing a fair, balanced and comprehensive work programme for the Assembly on each of the topics; providing background expert advice on the issues being discussed; and advising on the criteria for selecting specialists an expert to appear before the Assembly.

The Citizens’ Assembly will meet again on 25th November in the Grand Hotel in Malahide, at which time it will commence its consideration of the first item referred to it by the Dáil Resolution; the Eighth Amendment of the Constitution.

All public sessions of the Assembly, including the inaugural meeting will be live streamed on www.citizensassembly.ie .

Details of the Terms of Reference and Membership of the Expert Advisory Group will be considered by the Assembly later today and, once agreed; details will be made available on the Assembly’s website.

RED C Research and Marketing Ltd were appointed to provide a representative sample of 99 members of the public and substitutes for the Citizens’ Assembly. The methodology used to select the 99 Citizens, and the names of each member and counties they come from, will be made available on www.citizensassembly.ie following the inaugural meeting today.

The Assembly will be calling for submissions from representative groups, citizen organisations and members of the public outlining their views in advance of Assembly meetings and these submissions will help to form the work programme for the debate. More information about this can be found on www.citizensassembly.ie .

Once the rules and procedures and work programme have been agreed by the Assembly, they will be made available on the website – www.citizensassembly.ie. ”