Since Lensmen began in 1952 our PR photographers have attended a variety of events hosted by the Government or state. Beginning as press and PR photographers, attending official government events was ( and still is ) a frequent occurrence. Amazingly, Lensmen have attended every inauguration of an Irish president since Sean T O’ Ceallaigh in 1952. That means we have had photos of every president’s first day on the job! Except Douglas Hyde, the first president of Ireland. Below are some photos from each day that our photographers have taken over the years. These photos are a great time capsule of Irish history, with the same faces appearing in the background several of the earlier  photos. See our archive of photos on our site Irish Photo Archive. 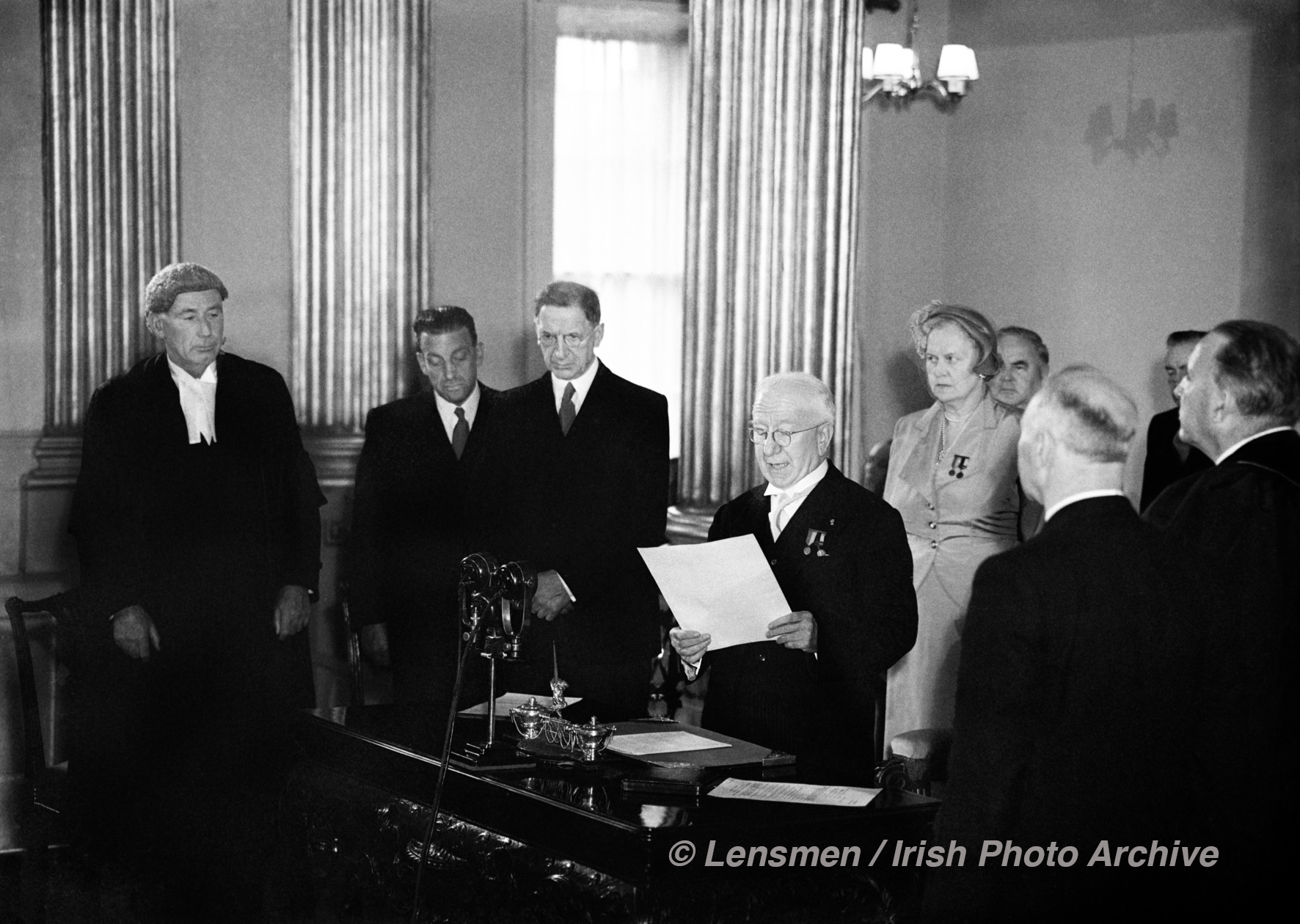 Seán T O’ Ceallaigh was one of the early leaders of Sinn féin, and was first elected to Dáil Éireann in 1918. He was the Dáil’s first Ceann Comharile, and joined Fianna Fáil under Eamon DeValera’s leadership in 1923.  Succeeding Douglas Hyde as president in 1945 O’ Ceallaigh became the second president of Ireland. He was reelected in 1952 without opposition and  he retired from public life after his second term. This photo taken by Lensmen in June 1952 depicts Sean T O’ Ceallaigh taking the presidential oath before beginning his second term. To his left is Eamon DeValera and Sean Lemass 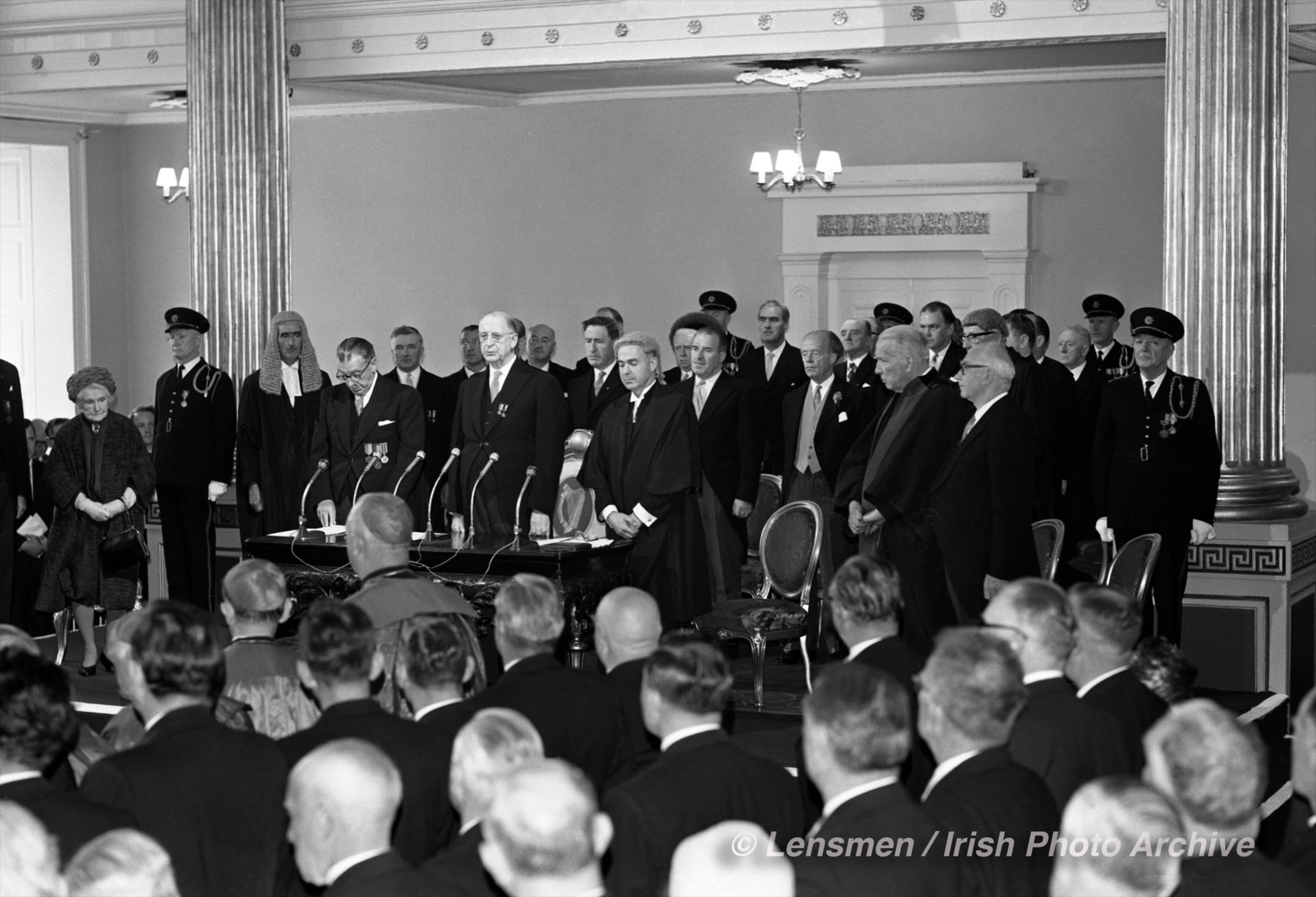 Eamon De Valera has had a leading role in in the development of Ireland since Ireland became a free state. From being a commander in the 1916 Easter Rising, escaping prison in 1919, reputing the Irish Free State agreement, founding Fianna Fáil, deciding Ireland would be neutral during World War II  and having a major role in the writing of the constitution, Bunreacht na hÉireann De Valera had a major part in the formation of Ireland as it is today. There are several books, websites and documentaries on DeValera that explain his role in the moulding Ireland including The Age of DeValera,   . 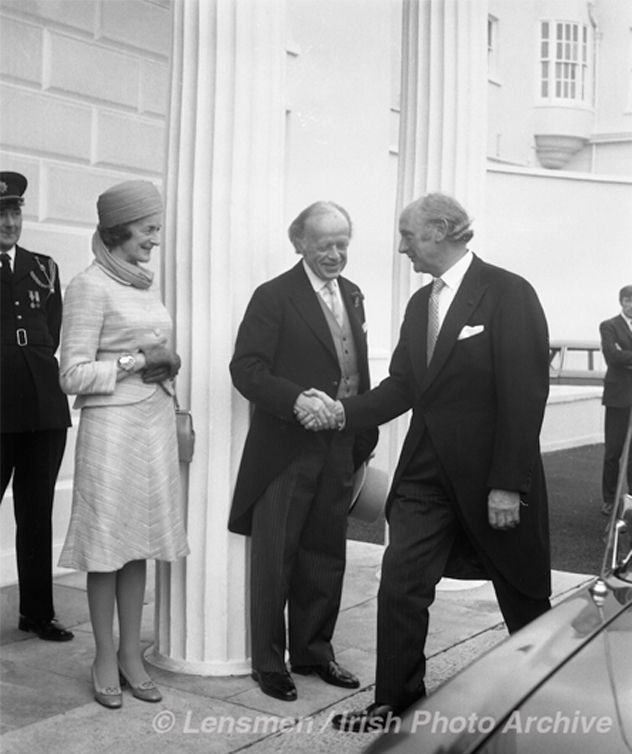 Erskine Childers, the 4th president of Ireland was president from June 1973 to November 1974 before suffering heart failure. Here is our photograph on Childers on his inauguration day, 25th June 1973, in front of Arás an Uachtarain. 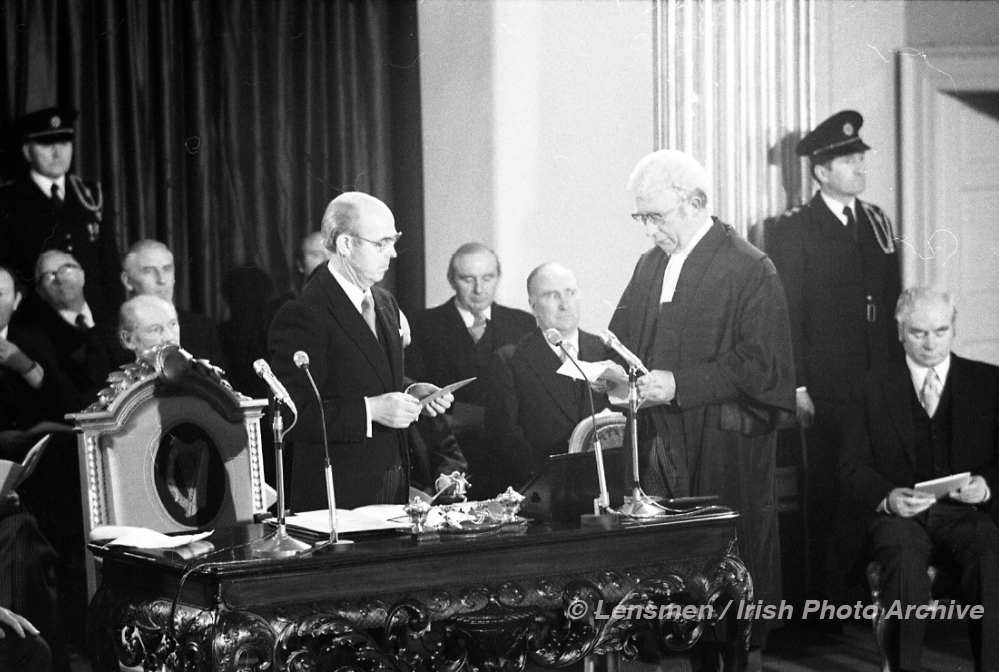 Lensmen image of Mr Cearbhall Ó Dalaigh being sworn in as President of Ireland by Chief Justice O’Higgins (19th December 1974). Directly behind him is the leader of Fianna Fail, Mr Jack Lynch TD. Following the sudden death of President Erskine Childers, Mr Cearbhall O’Dalaigh was nominated by The Fianna Fail party as its candidate to replace him. The Fine Gael /Labour coalition government did not oppose the nomination and Mr O’Dalaigh was elected un-opposed on a joint party agreement.

Cearbhall was a barrister by profession. He was Attorney General of Ireland from 1946 – 48 and from 1951 – 53. In 1953 he was appointed a Judge of the Supreme Court. He served as Chief Justice and President of the Supreme Court from 1961 – 73 before being appointed a Judge of the Court of Justice of the European Communities in 1973. He became President of Ireland on 19 December, 1974.

In 1976, Ó Dalaigh referred a bill that was to declare a state of emergency in Ireland to the Supreme Court before signing it. The Emergency Powers Bill was ruled as constitutional by the Supreme court and Ó Dalaigh signed the bill into law on the 16th October 1976. On the same day an IRA bomb killed a member of the Garda Síochána,  Michael Clerkin. The government ministers believed Ó Dalaigh had contributed to the killing of the Michael Clerkin by delaying the bill. The then Minister for Defence Paddy Donegan, , calling him a “thundering disgrace” due to a delay in signing a national Emergency bill. Cearbhall Ó Dalaigh resigned from office on 22 October 1976.

Like to talk to us about your  PR event ? Our PR photographers can call or mail you about any enquiry you have 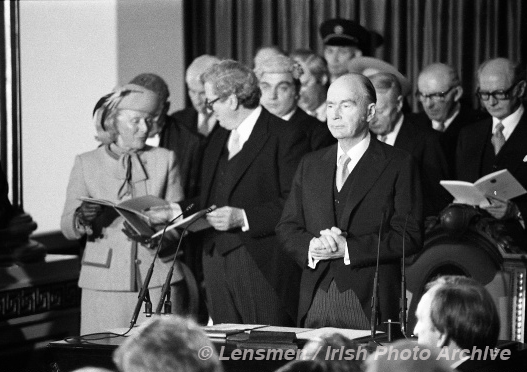 Patrick Hillery was a qualified  medical doctor and in 1951 took a change in career to be elected as a TD for Clare, becoming Minister for Education in 1959.  He subsequently served in several  ministerial posts Industry and Commerce, Labour and Foreign Affairs prior to his appointment in 1973 as Vice President of the then Commission of the European Communities, with special responsibility for Social Affairs. He served as Commissioner until 1976, when he was inaugurated as President of Ireland on 3 December, 1976. He was president of Ireland for 14 years from 1976 – 1990. He died on 12th April 2008. 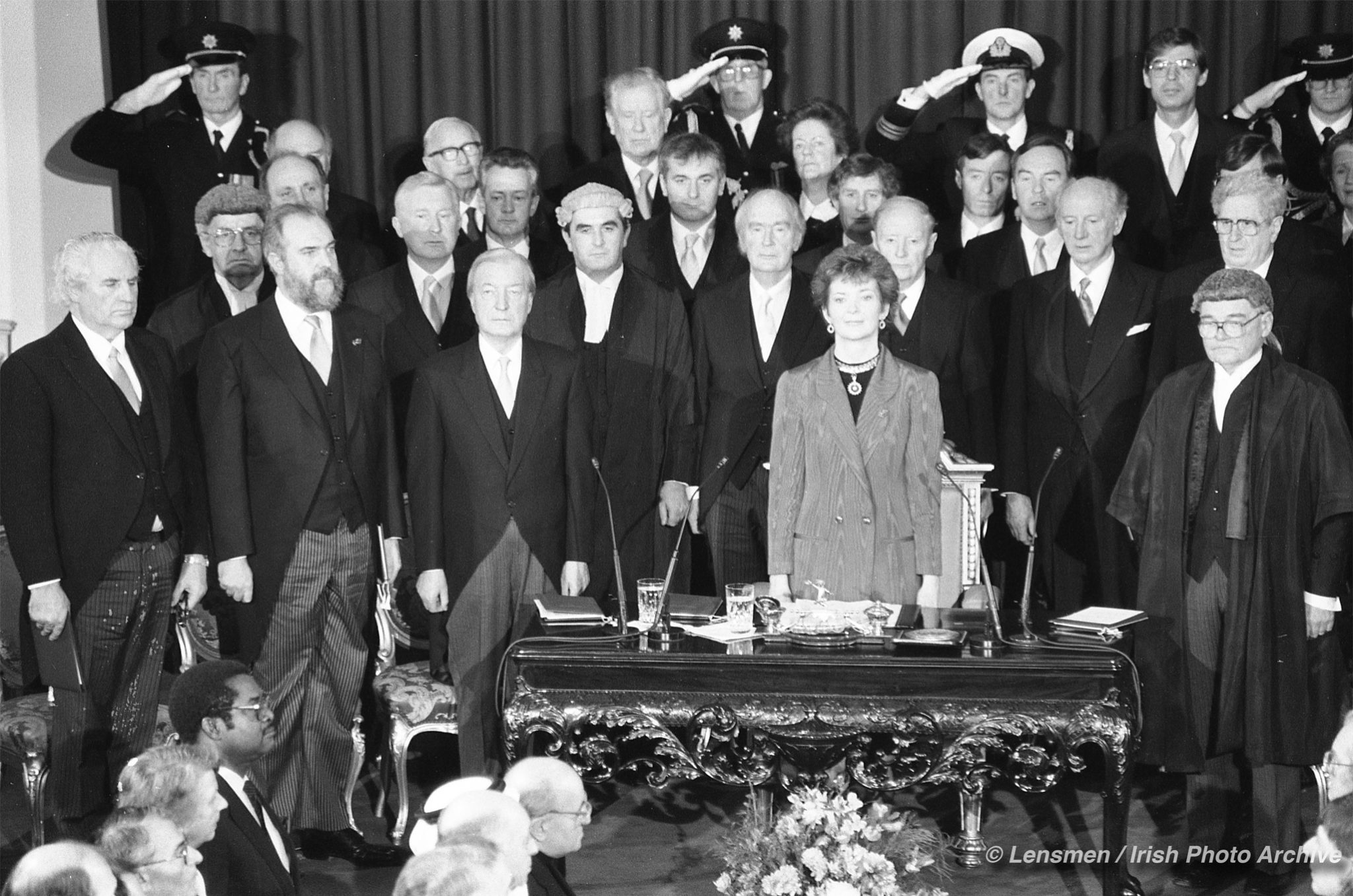 Our PR Photographers snapped this great photo of  Mary Robinson’s inauguration day, 3 December 1990. Mary Robinson was the 7th President of Ireland, and the first woman to hold this position.  This photo is a great time capsule of the changing politcal and economical stance of women in Ireland. More women were starting to choose careers after marriage. At the time, out of 166 TDs in Dáil Éireann, 2 of them were women. Today there are 35 female TD in Dáil Éireann. 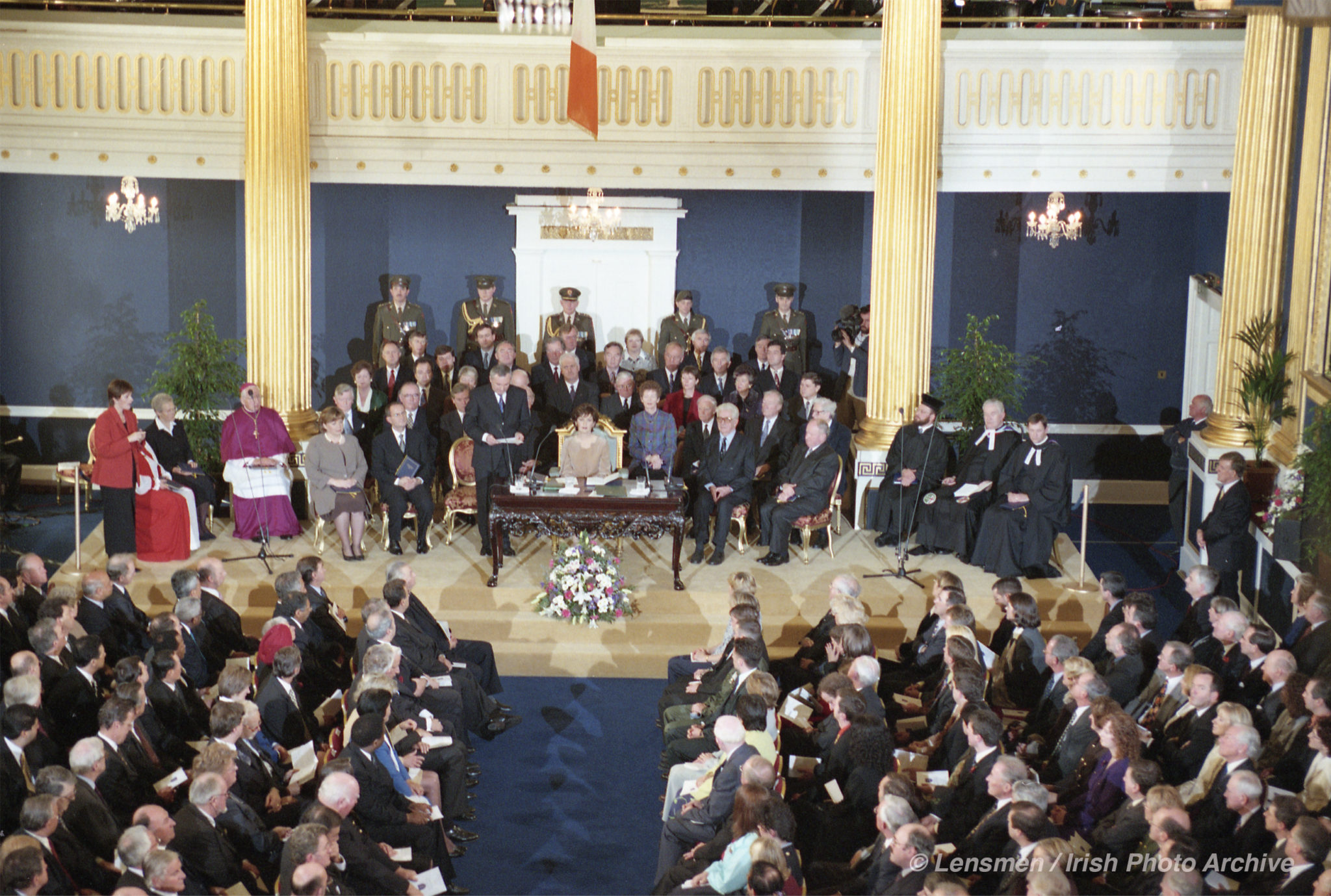 Pictured above is Mary McAleese’s inauguration on the 11th November 1997 in Dublin castle. Beside her is then Taoiseach Bertie Ahern. Born on June 27th 1951 in Belfast, she is the first President to come from Northern Ireland.  Mary McAleese was re-elected on Friday 1st October 2004 being the only validly-nominated candidate. She is a barrister and former Professor of Law.

Mary McAleese grew up in Northern Ireland during ‘The Troubles’. She graduated in Law from the Queen’s University of Belfast in 1973.  In 1994, she became the first female Pro-Vice Chancellor of the Queen’s University of Belfast. She also was a broadcaster and current affairs journalist for RTÉ. During her time as president she invited  Queen Elizabeth II of the United Kingdom to make a state visit to Ireland.  Queen Elizabeth accepted the invitation and it was the first state visit by a British monarch since Ireland had gained independence. McAleese also welcomed President Barrack Obama to Ireland during his state visit.

Currently, Former president Mary McAleese is  working  as a professor at the University of Glasgow. She has taken up a position as a professor of children, law and religion.

Like to talk to us about your  PR event ? Our PR photographers can call or mail you about any enquiry you have 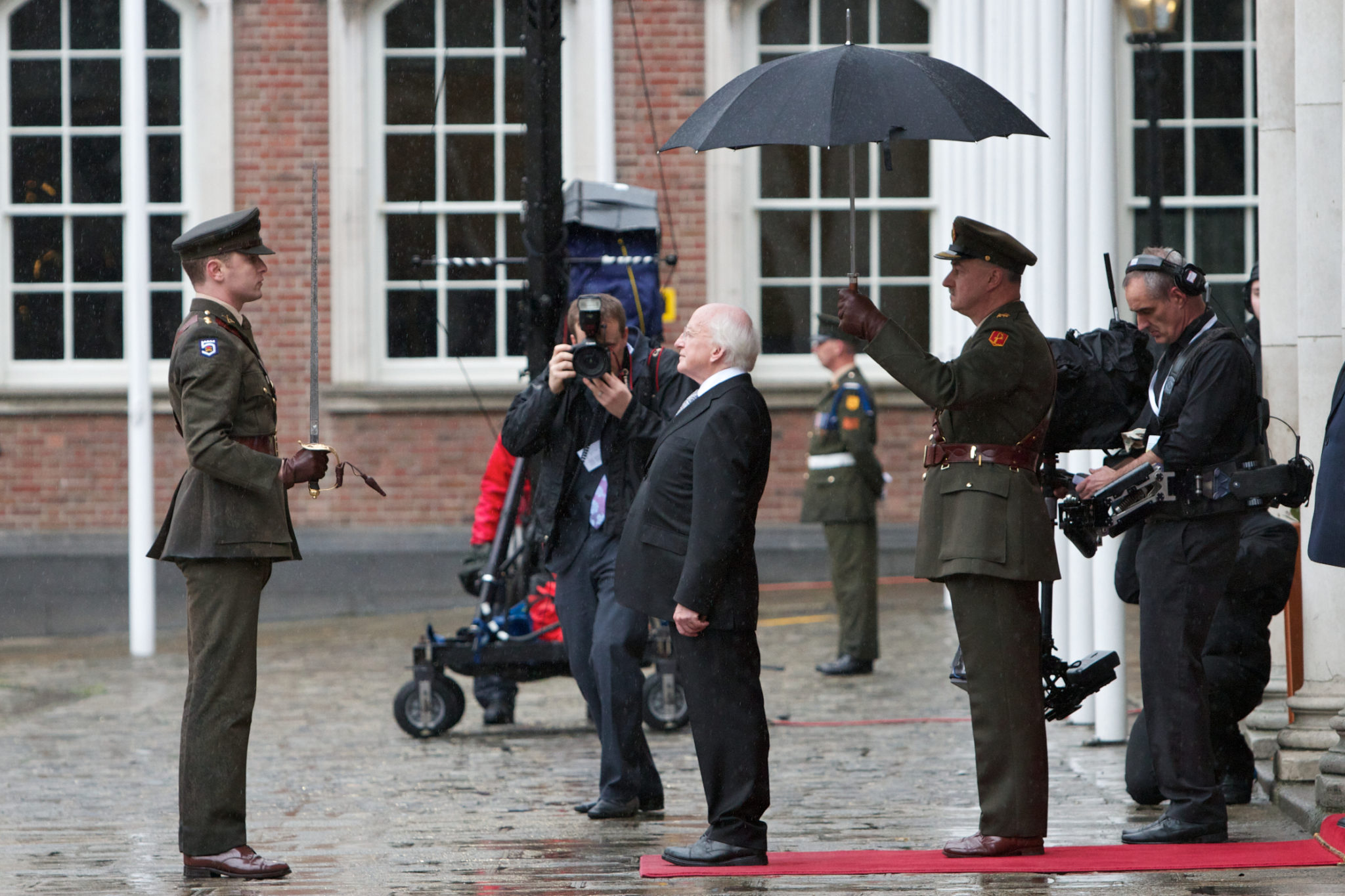 Michael D Higgins, outside Dublin Castle, on the day of his inauguration on the 11th of November 2011.

Higgins is a politician, poet, sociologist, and broadcaster.   He has even a TD for Galway West since 1994  and was the Minister for Arts, Culture and the Gaeltacht from 1993 to 1997.  He was the President of the Labour Party from 2003 until 2011, when he resigned following his election as President of Ireland.

Lensmen are one of the only companies that have been able to attend so many presidential inaugurations. Although the surrounding are the same, the changes through Irish history can be notice. Our PR photographers have done some excellent work over the years and we are very proud to have such an extensive amount of historic photographs. Contact Lensmen 01 819 7738 or info@lensmen.ie